Sorry guys! I went AWOL. Well, not really, but I haven't been giving you anything to read!

I don't have any excuses, but I do have a few reasons. Since OTT at the start of February, I have been so busy between work and real life, that the hobby time I have gotten mostly was away from the screen!

In saying this, I have been relatively productive with the time I had. I picked up a box of LotR Haradrim Warriors and Easterling Warriors, along with a box of Ogre Khans bulls. I have just finished painting up the Haradrim, hence why I am now sitting down enjoying a much deserved beer and spending time on my blog.
I have started converting (when I say started, I mean done very little but pretending like I have done heaps) the Ogre Bulls into Hold Guardians for my Dwarven Holds army. This is both exciting and challenging, as to accomplish the look I want, I have to do a lot (I mean a lot) of greenstuff work. The idea behind it is similar to that of the Animated Statues units for Tomb Kings in WHFB, that the Hold Guardians are Dwarven statues that a Rune Priest has bought to reality. The final product will look like heavily armoured Dwarves/Dwarven Statues, with raw magical energies pulsing through them.
I also picked up with some of my prize vouchers for OTT, another Daemon Prince kit. From this kit I am creating two Daemon princes. The first one, which I have only just started converting, is using the wings head arms and body of from the kit, and with a mix of wire and greenstuff, his bottom half will be made like a closed off cloak. The second Daemon Prince, which I have finished (at this stage anyways) the converting of, is combining the Daemon Prince legs and one of the weapon arms, with the body and wings of a Rot fly from the Plague Drones kit.
I have also started work on my Beast Herds army, in preparation for upcoming tournaments, but have reached a stand still very quickly into the project, as I am still struggling to settle on what colours and basing I really want to use to fit in the theme, which is based around the Three Eyed Raven from The Game of Thrones series. I really want to include a lot of blacks and greys, to keep with the dark idea of the theme, but at the same time love the way red comes off on these models. It's also a hard decision, that if I do go with blacks and greys, I need to keep the skin tonnes lighter to balance the colours and make the models stand out, but I'm not sure I am a big fan of the lighter colour tones on them. 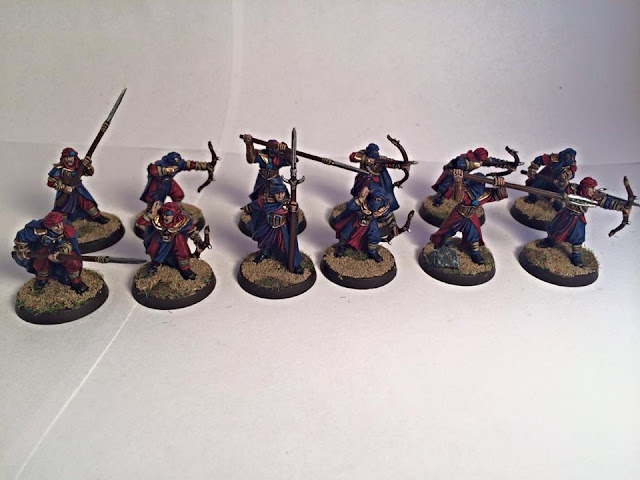 Speaking of tournament armies, I have two tournaments coming up! Both of them are 9th Age, and both of them are in June (okay, not still a little while away I guess).
First and foremost, is NiCon in Hamilton, which is being run by Hamilton Immortals this year. Brian S, who is the main organiser for 9th Age at NiCon, has asked me to help as an organiser as this is the first 9th Age tournament to be run in New Zealand, which is exciting! NiCon is being held over Queen's Birthday weekend at the start of June.
And then, at the end of June (dates to be cofirmed), is Equinox is Auckland! Last year at Equinox, under WHFB, I had a very poor final standing, so this year I plan to make a come back from it and show the very talented Auckland crowd that us Napiertonnians have what it takes! This tournament is run by Phil W, and I will also be aiding him in making it happen to bring out the second 9th Age tournament in New Zealand,

I haven't managed to get in as many games recently as I would have liked, only playing two games of 9th since I got home from OTT. This I am okay about, because I was waiting on the release of the final Beta version of the game, which came out today. We are expecting the full version to come out end of April.
In the first game I played, I took a Beast Herds list against Tom's Ogre Khans. This BH list was one that I was considering as a possible tournament list. I messed up quite a bit in this game, but did learn the value of a kitted out Minotaur Beastlord when he holds up a decent size unit of Ogre Mercenaries with a Great Khan in it for over half the game, but I don't think I will be running the list as a whole.
The second game was again against Tom's OK, but this time I bought out my Dwarven Holds. This game was different. My list was designed around the concept of inpenatrable armour, and shooting. And it worked, to a point. Based on my set up, I was able to avoid just about all combats that I didn't want to get into (and against the sheer number of Ogres charging down on my position, that was most combats). I pulled off a small win, and liked the list that I ran, though would make many changes to improve it. Although it was a very avoidance-played game on my part, it was still a lot of fun.

As for events and groups over the past month, Napier Executioners Club started up again for the month (very very late start to the year) and in the two meetings I have managed to get in some games of WHFB, 40k, and a lot of games of Settlers of Catan!
I also had my application to become a member of the newly set up NZ Hobbit League Committee accepted, and am running the merchandise part of this group (when I say newly set up, I mean we are having our first meet and greet/brainstorm/shit talk chat at 9pm tonight). I am really excited about this, and very appreciative of being given the chance to be able to work alongside some incredible hobbyists and gamers.

Anyways, time to get back into it. Would love to hear about what you guys have been up to and see some photos of your WIPs.

Until next time, Peace!
Posted by An Empire Fallen at 18:10