What a great first start to the campaign. A fair number of games were played, and they really showed the calibre of players we have in our local area, both on the table and in the list building. The sheer number of defences that were won, mixed in with draws, caused minimal change to the map, with only Caleb successfully conquering any territories. 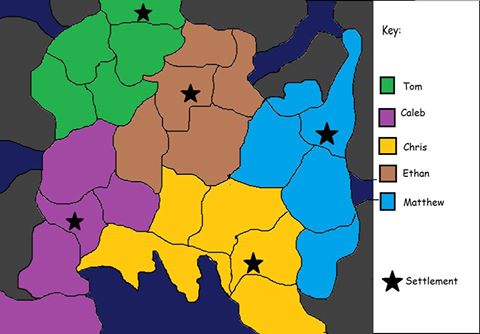 Map at start of the campaign

Chris attacked Ethan (Ethan Won)
Chris: May not use Ushabati in next game
Ethan: Causes Fear against Undying Dynasties in next game against them

Tom attacked Ethan (Ethan Won)
Tom: General and his unit gain Hatred and IoP against Ethan in next game (if he has recaptured his            general
Ethan: General would have increased a stat except he cannot as he is currently captured

Ethan attacked Chris (Draw)
Chris: General gained +1 Movement
Ethan: Causes Fear against Undying Dynasties in the next game against them

Caleb wasn't able to make the game where Ethan attacked. An agreement was made, and Ethan's General was released from captivity 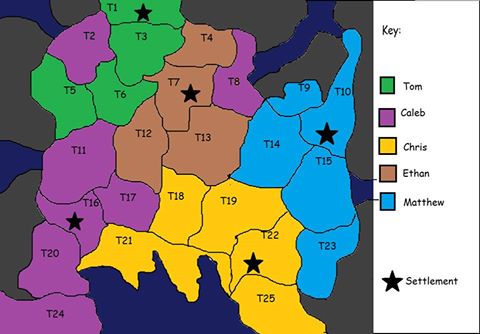 Map at the end of Turn One

Game One (Undying Dynasties vs Beast Herds)
To kick off the campaign, Chris's Undying Dynasties attempted to take control of one of my territories (T12). The living dead lined up ready to take out the Beasts, but the blood hungry animals were out for blood, and quickly crushed the skeleton assault. This was the only one-way landslide game of the entire turn.


Game Two (Vermin Swarm vs Beast Herds)
Although distracted by the rise of the dead in the South, the Beast Herds quickly swelled to their northern lands to defend against an attack from Caleb's Vermin Swarms (T8). This was a bloody battle, with many creatures from both sides falling to the bloodied blades of their foes. However, the tides of Vermin were too many for the Beasts to handle, and their defence eventually fell apart, and the herd fled from their water way territory. In their flee, the general tripped, fell, and was jumped by a bunch of rats! They quickly tied him up, and rushed him off to sacrifice to the Vermin gods!


Game Three (Orcs and Goblins vs Beast Herds)
Having also just lost land to the Vermin, Tom's Greenskins were enraged, and threw themselves in an assault against me (T12) in an attempt to break free from the surrounding forces. Tom bought out an almost all out gunline style of Orc army, forcing the Beasts to do what they do best, and charge forward to the enemy! It didn't take us long to engage, but even then, this shooty greenskin army put up a good fight, and the game ended with a minor win to the Beasts.

This was to draw the first turn to a close, however, before the new turn started, our Highborn Elves player made the decision to pull out due to time constraints...So a Skeleton, a Rat, an Orc, and a Minotaur, all stood their in silence, hands held, and watched the graceful ships of the pointy eared elves sail away to distant........yeah no, they just went and took claim to the elves previously owned lands instead! 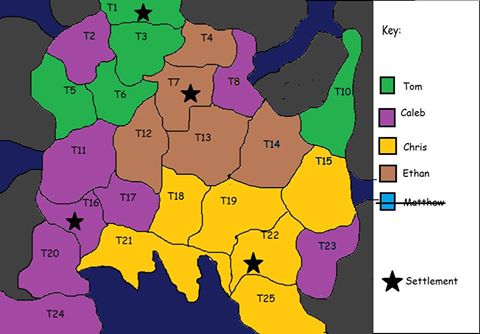 Map at the start of Turn Two

Matthew's departure from the campaign was unfortunate but fully understandable. Although we have filled the territories, we are still looking for other players to join into the campaign, in which case we will give them the average number in territories and points, and increase the map size.

A great start to the campaign, and hopefully we will see even more games played in Turn Two!