Hello. Yes, I know, I haven't been around. Yes I know I promised a post a few weeks ago, and never did. I've been busy. Life takes time. And so does having heaps of hobby fun!

So first and foremost, Panzershrek! Panzer was held in Palmerston North over the weekend, and this long time running event had a new Tournament Organiser, a huge 9th Age supporter, who pulled off a great weekend for all.
However, my game play was not great. I started the weekend rough, and went down hill from there, making many mistakes and misplaying my army on numerous occasions. If I am honest with you, it would have been one of my worst tournament performances in a while, yet I managed to land my best placing, taking 6th and sitting nice and squarely in the mid-pack. How this happened I guess I will never know.
I did manage however, to pull one thing off. It was close, very very tight on points, but I guess my Blood Hunt Beast Herds army pulled through, yet again...... 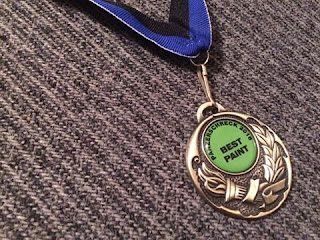 Yep, that's right. I snuck by taking out Best Paint again, and the votes were extremely close between myself and a beautifully painted Warriors of the Dark Gods army, owned by the player who took out Best Overall.
This puts me at 3 Best Painted and 1 Best Painted Single Character (won by a commission I did) this year. 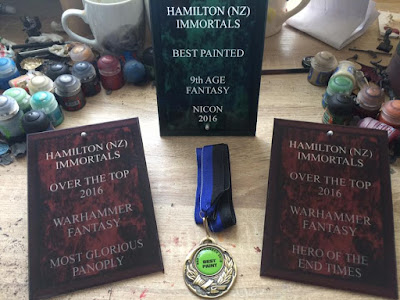 I guess I found what I am good at!

So speaking of painting, I also have finished doing some. I needed a couple new units for my Beast Herds for Panzer, so it was straight to the painting table. I took a unit of Feral Hounds, which I used the Space Wolves Fenrisan Wolves models for, as they are really great sculpts. I also needed a unit of Gargoyles, so picked up some Kings of War Gargoyle models. I will post photos up of these soon.

On top of my own painting, I picked up a commission, which players at Panzer would have seen. 8 Ogre Tribesmen and a Ogre Shaman, all converted out to be packed full of a Pestillence theme. It was definately a fun commission, and didn't come without its challenges, but I feel I managed to pull it off how I had expected. I will post photos of those soon too!

So next up on the panting station. Well, I have a new commission of about 10 Ogre Tuskor Cavalry to do, which will be a good bit of fun. I also am working on getting my Bronze Legion of Pestillence Warriors of the Dark Gods army ready for Guardcon in September, as I believe they will b seeing the table there. To prepare for that, I need to paint up 8 Knights, 1 Lord on Daemonic Mount, 1 Mounted Sorcerer Lord and 5 War Hounds, along with touching up and finishing off a Chimera and a Mauler Chariot. Lots to do, but plenty of time, and I am looking forward to putting the Beast Herds away for a little while.

But I don't just paint models, I play with them too! Outside of Panzer, the Hawkes Bay Regional Championships have begun, and so far I have played two out of my four Heat matches. I took a suprising 10/10 draw with my Empire against an Ogre Khans opponent, only to be shattered by a 19/1 loss to Undying Dynasties (I guess the skeletons of the Empire are better then the living of the Empire!). This puts me at a very low position, with only 11 points out of a possible 40 half way into the heats, and I really need to pull off two decent sized wins in my next matches if I am to have the chance of proceeding to the next round.

In light of the HBRC, I have decided it is time to start creating my Video Battle Reports. This is something I have wanted to do for a while now, but just haven't had the time, or had too many issues doing. So, I plan to start carving out time to do so, and what better place to start then the HBRC games I play. Its small points, which should make it easier for me to finding my feet in the world of Battle Reporters.

Well its almost midnight, and between more HBRC games and painting tomorrow, I should head off and get some much needed shuteye. May the Gods of the Empire be with me tomorrow and I seek to fend off against the Warriors of the Dark Gods, and the cold-hearted Saurians.