It suddenly hit me today: we are almost two weeks into the new year! How time has flown already, and so much has happened already! I'm not exactly sure where to begin...

Firstly, let's talk about the models. As many of you now know, I have just handed in my list for the Over the Top WHFB 8th Ed: The End Times 2400pt tournament over Waitangi weekend in February. I am taking the Bronze Host, which shall be led by The Glottkin himself. So, as per my usual tournament hussle, I have purchased a few more models! I picked up two boxes of Plague Drones, courtesy of Elven Glades blogger (link to his blog at the bottom of this page), and will be on Thursday picking up the Festus the Leechlord and Gutrot Spume models. Although I am trying to avoid purchasing models around 8th Ed, and focusing on 9th, these are some pretty cool miniatures that I have wanted to own for a long time, so am glad to finall get my hands on them. I also managed to build a new BSB miniature, this one on a Palaquin. The conversion took me some time, and the painting side took longer while I tried to work out what colours I wanted to use, but I am impressed with the final product. I have shown pictures in a previous blog post while it was a WIP, but here's some pics of the final product: 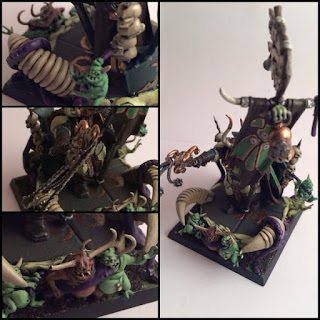 I also took on a new army, and this one, is purely for 9th Age! It just so happened I was scrolling along TradeMe, and discovered some Beastmen models going for cheap. And then I found more. And then more. And all of them were the models that I would need for some lists I was writing for fun for Beastmen. So I hit BUY! So now I am sitting here frantically waiting to see a courier turn up with a big box of blood hungry beasts for me to paint! So, if you don't see me around soon, I am either head down painting up more models (the backlog ever grows) or my wife has finally had enough of my hobby, and set it on fire, or just killed me instead! lol.

I also purchased (yes I know, a lot of hobby buying this month!) an airbrush and compressor as an early birthday present for myself. The catch now is, to get it set up and going so I can use it to get my army finished for OTT in February!

Outside of the hobbing, painting and gaming side of things, the community side has just started getting busy as well!

At PlagueBearers, we have finalised the player pack and rules for the first of our events this year, The Reign of Fire WHFB Campaign, and are hard at work getting our 40k campaign set up and ready to follow. We haven't yet been able to set dates, however I do not believe the WHFB campaign will start any later then the first week of February. We also havem't kicked back into club yet, which should happen soon, and are still on the hunt for a potential new premise. 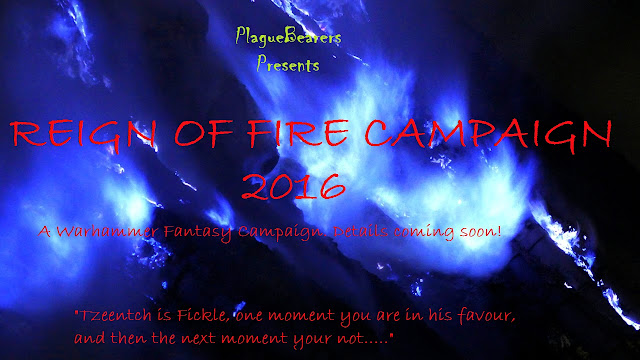 I also applied to become a part of the 9th Age Team. My application was accepted, and I was offered two positions to chose from. The first, was working as Armybook Support. This position didn't have a hand in the work on the army books themselves, the rules or the balancing, but was designed to work with the players to help communication regarding the books, answering questions and clarifying things where needed, and to collect data from the community. The second position, which was the one I accepted, was as Tournament Support. In this role I am to be the intermediary between The 9th Age Team and tournament organisers, help organisers with there events, and collect data based on tournaments and events. As it happens, I am the sole Tournament Support for New Zealand, and will potentially in time take on part of Australia also to help whoever takes on that region. There is a lot of other things that both of these roles also entailed, but those are the main points

If I wasn't busy enough, I have just applied this evening to join the New Zealand Hobbit League committee, that is in the process of being set up. There are four main positions available in this committee, being Hobbyists, Gamers, Painters and Organisers/Community. I am hoping to be able to fill the community role. Along with this, they are looking for a person/people, to head up and run the NZHL Merchandise team. As this sort of thing is something I have wanted to do for other hobby and non-hobby related areas of my life, I thought it would be a great opportunity for me that I would excel in. 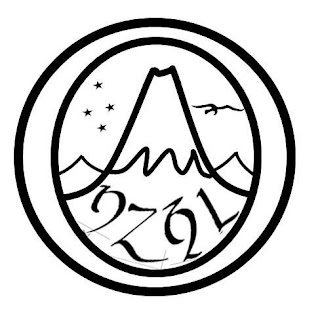 Its a busy time of the year, and I do not see it slowing down anytime soon. What is it that they say? Grab the Rhinox by the balls and.........


My dear friend, the Elven Glades:
http://elvenglades.blogspot.co.nz/
Posted by An Empire Fallen at 00:30 No comments: