It has been a crazy few weeks, and it is only getting more and more crazy!!!

As you know from my other blog posts, we have been running a 1500pt campaign for 9th Age over the past few months, and it has been going really well. However, today is the end of turn 4, and only one game out of the potential 15 have been played! With everyother turn sporting an average of 9 games played, this was a big drop. Why may you ask? Well, 4 out of 5 of us are off to NiCon 2016 to compete in the second NZ 9th Age tournament! Yahoo! Road trip time!!!!!! Because of this, many of us have been playing tournament prep games as we try to work out our lists. We are also taking a break for two weeks, to give everyone more time to focus on NiCon without trying to fit in campaign games too.
Because of this, I won't be doing a post for turn 4, but will add it as a joint blog post with turn 5 once we have completed that turn. But as a little spoiler, this is what the map looks like at the end of this turn..... 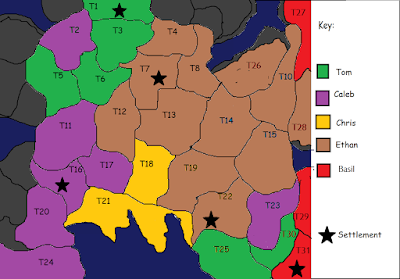 Tribal Warfare Campaign Map at the end of Turn Four

So, you may ask, how has only playing one campaign game and a handful of tournament prep games made the past few weeks extremely busy? Its quite simple really.

Three weeks ago there was very little to no paint on my Beast Herds army. Half of it wasn't even here yet and I was waiting for the orders to arrive. And with only two weeks from now until NiCon 2016, where my Beast Herds are making their tournament début, it has only given me five weeks to paint this 2500pt army from scratch! It has been a lot of very late nights followed by early morning rises to get to work, but progress has been made!

At this point, I have only 3 characters, a gortack, a jabberwock, 20 mongrel raiders and 8 charioteers to paint (the charioteers I need to finish converting too). That may seem like a lot, but in comparison to what I have already completed, it isn't.
I am yet to base any of these miniatures, as I am waiting until my display board for them is ready to base, and I will do it all in one go. I also need to make a lot of scratch built trees for the display and unit fillers, so there is a lot of things left to keep me busy!

Over the weekend of NiCon, I will keep a regular update on the PlagueBearers Facebook page of the team and their game results. You will be able to find this at:
www.facebook.com/plaguebearers

And with that, I now must get back to my paint station, where I shall attempt to start the next series of models! I leave you now with photos of my progress, and what is left. 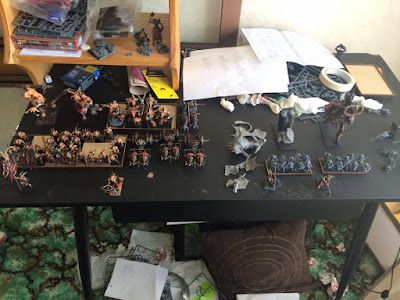 An overview of it all 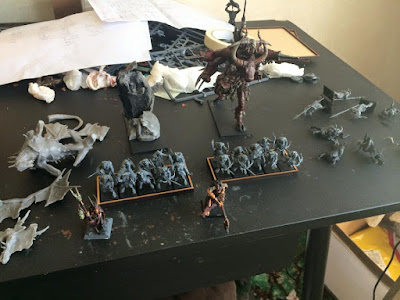 The unpainted section, minus a mage who is currently soaking in simply green 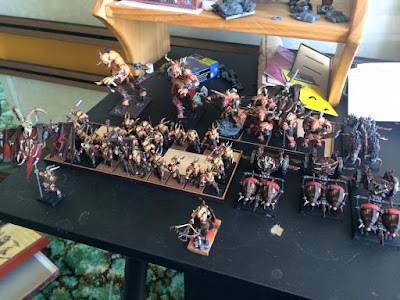 The painted side of the table.. 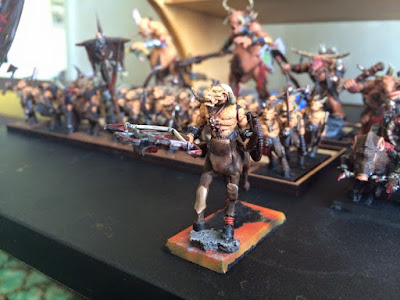 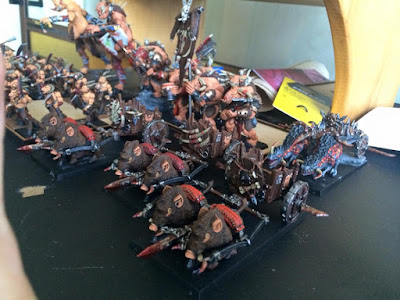 The line up of Impact Hits, with three raiding chariots and one razortusk chariot 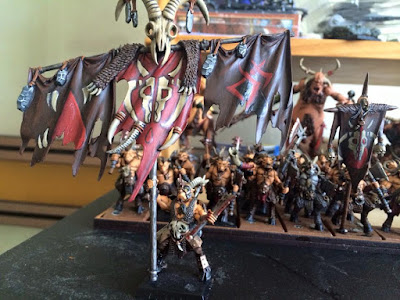 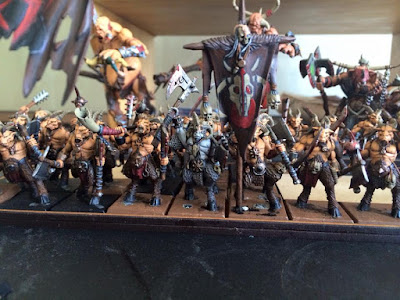 A horde of blood-thirsty Wildhorns 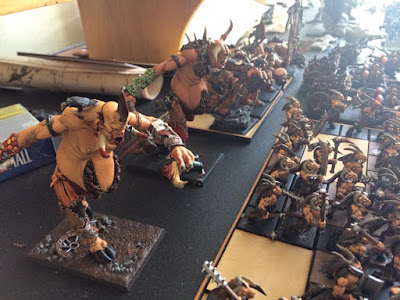 The Giants
Posted by An Empire Fallen at 17:49 No comments:

First and foremost, many apologies! We are over half way into Turn 4 and I am only now finally getting a chance to sit down and write this. In a few days time I will have another blog post up, which will show you why.

Things have started to slow down a bit as everyone here preps for NICon 2016, where I alongside an amazing gamer and hobbyist, will be running the second New Zealand 9th Age tournament. However, the nine games played were very intense, as everyone struggles to take control of the south east territories. 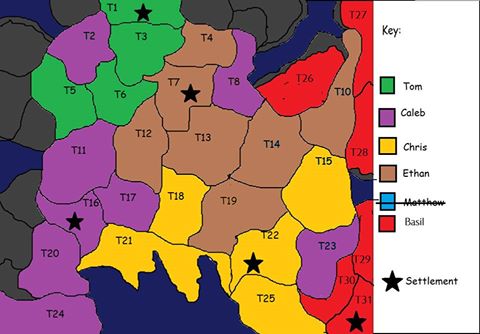 Map at the Start of Turn 3

Chris attacked Ethan (Ethan Won) T25
Chris: -1Ld against Ethan in their next game
Ethan: General gained a piece of Mundane Equipment, but is already maxed out

Tom attacked Ethan (Tom Won) T25
Tom: Gained Fear against Ethan in next game
Ethan: -1Ld against Tom in their next game 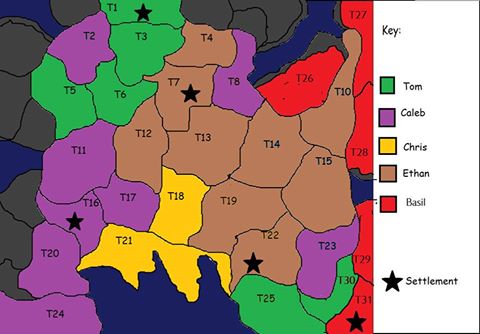 Map at End of Turn Three

That brings us to the end of Turn Three, and as you can see, its been a hard battled corner of the map.
The Vermin has made no moves in a long time...has the Under-Empire been deserted? Or are they up to their usual sneaky plans?
The Greenskins are looking for blood, and have smelt it in the south. The question is, is this the same horde? Or a completely different tribe?
The Undead are being pushed from their land, their bones thrown across the map like ashes in the wind. But we all know what happens when a Necromancer appears to a field of bones....
The Vampires have tasted blood, and they are angry. Can they bring a red tide of Death over us all?
The Beasts are hungry, and will kill anyone who gets in their way. Is it time to stem this tide of frenzied goats?
Posted by An Empire Fallen at 01:29 No comments: