Yet again, I have been absent. I know I know, I am a slacker.  But I'm here now, siting outside in the sunshine enjoying a beautiful brew of  single origin coffee.....yeah yeah okay, I know you don't care about the coffee lol.

So firstly, I want to talk about some tournaments and events!
WarBanner is  coming up on 8/9 October, and I am the Event Organiser for it, and am also running The 9th Age tournament for it. T9A and FoW have been confirmed as running, and AoS will either be confirmed or cancelled at the end of this week, depending on numbers registered. You can find out all the information you need under my Events tab, along with registration forms. It will be a great weekend, having fun in the sun rolling dice and drinking brews while hanging out with awesome peeps!
So, here's just a lil teaser for you....
https://www.youtube.com/watch?v=kU5qqI2jJ1g
I have also managed to become the TO for T9A at Over the Top in Hamilton over Waitangi weekend starting next year, and am co-TO for T9A at NiCon 2017 in Auckland! So many events!
We also have the NZ Invitational for T9A in late November, which I am running alongside my good friend, The Elven Glades (http://elvenglades.blogspot.co.nz/). Hopefully, depending on how WarBanner and GuardCon goes, I will also be competing!
Oh yeah, but before all of this happens, is GuardCon at the end of this month! This Auckland tournament is hosting T9A, and you know that mean's I will be there! I am debating at the moment if I will be bringing out my Beast Herds again, or if it will be time for my Warriors of Pestillence to debut on the 9th Age tournament scene, but we will see. It all comes down to how much spare time I have to paint my own army....

In local news, we held the Hawkes Bay Regional Championship: T9A finals a few weeks ago, and I managed to pull off Second place for my second year in  a row, losing my final match to McCrae L, who took out the gold. As with last year it was a great event, and these competitive yet low point games are a lot of fun. PlagueBearers are in the process of setting up the X-Wing and FoW versions for HBRC, so more games to come! 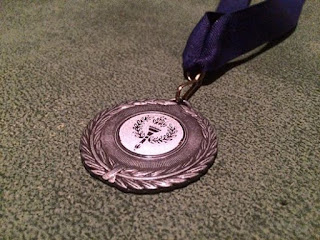 I also got asked the other day to jump in on a Mordheim campaign! What a blast from the past! I am looking forward to building up my warband, and getting some games in! Now just to work out what to take....

On the painting station at the moment is a very fun commission, a full 2500pts worth of Ogre Khans! This time, we are taking a step away from the Chaos themed Ogres, and are creating an icy feel to this Mountain Tribe.
I love doing commission work for this client as he gives me a lot of creative license on what I can do, which allows me to try techniques and styles that don't normally fit with my own paint schemes.
This commission is due to be on the table at Guardcon, so a lot of work still do be done.
Here's a sneak peak.... 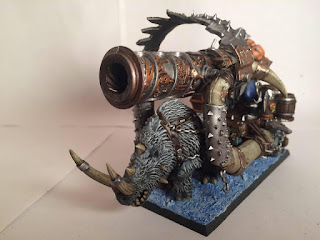 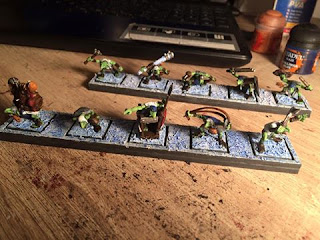 Lastly, I am about to start writing a series of fluff, which will be called Memoirs, starting with the Memoirs of an Empire. Basically, with T9A being an open platform with no storyline yet created, I will be creating a background for my own armies, starting with my Empire of Sonnstahl (hopefully this will be an incentive to get them painted!). I will create a series of narritive campaign style games that I will play out with friends, and use the results and the things that occur during the games to help create the story. These games will be a mix of standard matches, unbalanced games, small skirmish battles using a converted Regiments of Reknown ruleset, Siege battles and City Streets battles.
It will be all written in the views of a single warrior in the army, as if it was a diary entry after each event and battle occured.
I intend to post these as each section is done, to hopefully inspire you to create your own story behdin your forces!

Anyways, back to the painting table I go! Peace!
Posted by An Empire Fallen at 19:41 No comments: