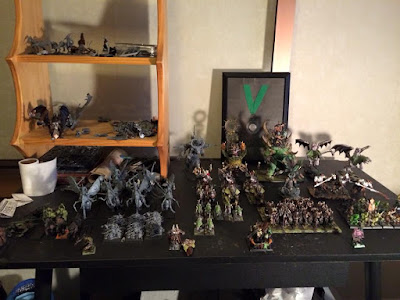 It has come to the end of yet another year, and what a year it as been! It has been full of many ups and some lows, but a good year all round.

I decided today that I needed to put all of my Legion of Nurgle down on one table, and see how much is there. Well, as you can see from above (with many WIPs and some fixes to be done) my Legion has far grown from just an army but to a collection. And it's nowhere near finished!! There is a fair amount yet to be painted, and from a collection point of view, I plan to convert some chosen and forsaken for it, along with getting more plaguebearers too. The small additional with the Cygor (or its counterpart, cannot remember) was due to a prize I won in Auckland, and was never intentional to be apart of this, however, now I would like to add some Minotaur to this collection too, and maybe a few other Beastmen models!

High point for me this year would have had to be how WarBanner turned out. It was my second year running this WHFB event, and after the release of Age of Sigmar, I was concerned about how much attention I could draw to the tournament. Nevertheless, we hosted 16 players. It was a great event, filled with laughter and drinking, and a lot of poor dice rolls by everyone. I am really looking forward to hosting it again next year, and expanding it to cover at least one other platform.

The low point for me this year was a difficult one. At first while thinking about it, I really felt that AoS coming out and taking WHFB place as a GW game would be it. But we have all had our rage fits and dice-throwing-tantrums at GW about that, and I realised that there was one thing that bugged me more. My first tournament this year, Equinox, was a great tournament. However, food in South Auckland is not so much, and after having a questionable pie purchased at a store there on the Saturday, I was up all night sick, and missed most of Sunday's games. This was really disappointing, as I was really looking forward to the games.

Nevertheless, the past is the past, and we must look towards the future.... 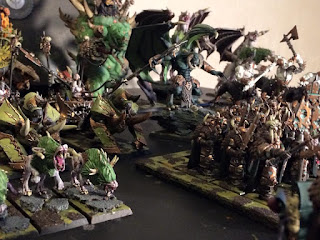 First and foremost, we are moving to Tauranga about mid year! Time for a new scene and new adventure. What this means is I will be changing club, meeting new players, and rolling more dice! It also puts me in a more central position to other centres, making games more accessible.

As for game wise, I will really be looking at continuing to push Ninth Age as it comes out of Beta into a fully fledge game, and will hopefully be able to promote more events for it. I am also really enjoying 40k at the moment, and have just started toying around with some X-Wing (Yep, the Star Wars buzz has hit me too!). I would like to look into Maulifaux and Saga, but that is dependant on time. I am also set for at least 3 tournaments already for next year, with the plan to get to as many as time and money will allow

In regards to hobby, well there is lots to do! Firstly, I have my Legion of Nurgle I would like to have completed by the end of the year. Secondly, My Tau all need to be striped and repainted. But I also have a 300 themed Warriors of the Dark Gods army to convert and paint for The Ninth Age, and Dwarfs that need........oh look! Something shiney!
But seriously, as every hobbyist knows, there is always something to build or paint or convert, and always many new and cool ideas floating around in your head.

So that is me for the new year. I can't believe it is that time again already, I really can't.

An Empire Fallen, over and out for the last time in 2016! 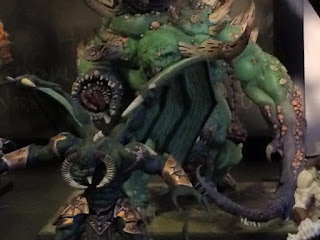 Posted by An Empire Fallen at 00:55 No comments:

So, I know I have been quiet on the blog front for the past month, so I decided I needed to spend a few minutes and tell you what I've been up to!

First things first, they released the Beta version for The 9th Age!  This was a massive step towards the continuation of Warhammer 8th Ed, and contains an incredible ruleset. So, I have been nose deep in the rules, trying to learn them as quickly as I can, and try out a few different list combinations, and snuck a game or two in also!

Then there was the Hawkes Bay Regional Warhammer Championship 2015. I managed to come out of the heats with the most points out of all the competitors, only losing on game with a 9/11 loss. After the heats, the top four proceeded to the semis, with the winners of each pair proceeding to the finals. My semi final game was quite tough, with my Dwarf list not being optimal against his Warriors of Chaos. However, after a very rough start to the game, and me not expecting to make a come back, I managed to turn the tables by surrounding his main units and crushing them, while picking everything else off one by one. A close victory, but a victory none the less. Then came the finals, and what do you know, I was up against my best friend and his Dark Elves, the player who I lost my only heat game to. His list was the list my Dwarfs were designed to handle, and I went in there ready to take the glory. Well, lets just say, the dice gods had decided that first place was not for me. With a lot of extremely bad rolling, and a few bad judgement calls, I took out second place over all. Lets just say I am not complaining, it's nice to have a shiny thing hanging on the wall! 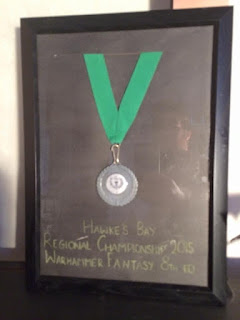 Now, going back to the 9th Age, Equinox tournament in Auckland in April has said that it is most likely going to be 9th Age. This is great! If they do go with 9th Age, they will be at the forefront of bringing 9th Age to the competitive scene in New Zealand. So, what does this mean? I have an army to prep! However, it also coincided with me wanting to create a new Warriors of Chaos army based around 9th Age rules, with a full Spartan theme (and yes, the inspiration is mostly from the 300 movie!). What this means, is I now have 4-5 months to build an army from scratch, an to convert a lot of marauder models into Spartans!

Oh, and talk of tournaments? Let's talk about what's happening on Waitangi Weekend! Over the Top tournament is on again, and this time it is taking a full on End Times spin with Warhammer 8th ed. Now, I will neither agree nor disagree that writing a list that I am happy with for this tournament was easy, or that I lost 4-5 nights sleep with ideas and lists running rampart through my sleepy brain, however I finally settled on a list that I felt was not only competitive, but kept with the End Times feeling for the tournament. Hey Glott, ready to take your Bronze Legions to war? 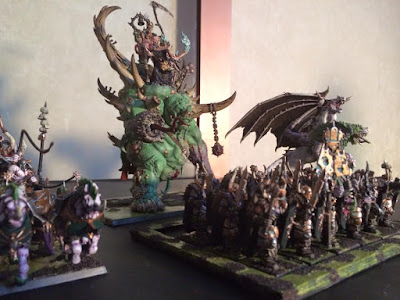 This also meant that I have work to do, and with only 2 months to go, got right on it. While waiting on some Plague Drones and special character models to arrive, I started with my BSB on Palaquin conversion. Here is the work in progress photos, with a lil bit of paint as I figure out how I want it to look. 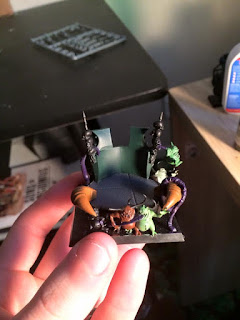 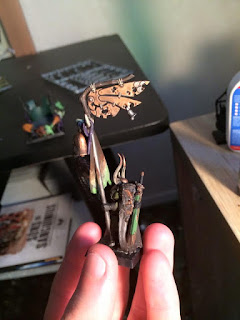 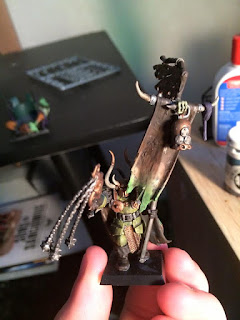 And to top it all off, because of OTT, I picked up a commission from a friend of mine who I painted a unit of Phoenix Guard for earlier in the year. Only this time, it's Teclis and 30 odd Lothern Sea guard. 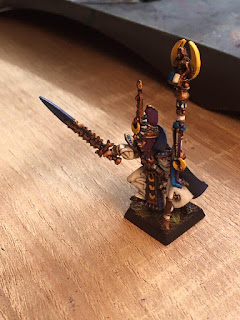 Teclis has been completed, and I have started working on the seaguard which I will hopefully have finished by mid next week (more sleepless nights!).

So that's a little bit from on what has been up as I gear for a huge year a head, both in my personal life and in my world of wargaming, and a lot of changes are instore for both, and for the PlagueBearers team. But change is always good, almost as good as a holiday. ALMOST.

So if you do not hear from me before the new year, I am sorry, but I shall be drinking and eating and festing my way around a very full on painting station. Christmas? What's Christmas? I don't have time for that!!!!!

Merry Christmas to you all, and have a happy holiday!
Bye for now.
Posted by An Empire Fallen at 23:52 2 comments: