It feels like ages since I sat down and seriously painted, yet it was only just over a week ago that I finally put down my paintbrush with a completed force ready for NiCon 2016. As I write this, I am looking at my painting station only 5 metres away and thinking I really should get some painting done, however I am nice and warmly wrapped up under blankets trying to defend myself from Winter's frost...

...but anyways. What has happened in the week since NiCon? And what is next?

Well, firstly, lets talk tournaments. I have just confirmed registration to Panzershriek in July, and will be playing in 9th Age. I am excited to get away to another tournament so soon, and to watch the 9th Age tournament scene grow!
We have also confirmed that WarBanner in October will be on the 8-9, and that its main event will be 9th Age!......
.......did you see the key word? Main event....that's right! This year's WarBanner is planned to be able to hold more then just one event. We currently have a high chance of having a Flames of War tournament there, and have a few other game systems we are trying to pull in! If you want to run an event at WarBanner, let me know! The more the merrier!
Regarding future NiCon's, the 2017 event will be held in Auckland, and I have been accepted to run 9th Age there. Furthermore, I managed to secure NiCon making its way to Napier in 2018!!! Yahoooo!

So that's tournaments, what about whats happening locally?
Firstly, we are bringing out T9A Tribal Warfare campaign to an early end, with next Tuesday being its final night. This is due to several reasons, inclusive of people wanting to try new things. The campaign met its goal of bringing players in and helping them learn, so I am happy.
With this in mind, and my impending move to Tauranga, we have decided to bring the Hawkes Bay Regional Championship for 2016 forward, and will begin it in just a few weeks. This will be a 1500pt 9th Age tournament list competition, and is a knock out event. Last year was a great lot of fun, and I have no doubt this year will be too!

So down to the painting station. Between now and Panzershriek, I have to get 10 models painted for my Beast Herds army, as I have decided to bring them back out with some minor tweaks to the list. I have also started to work on my Empire of Sonnstahl army, as it needs some loving, and after playing an EoS army at NiCon, its really made me want to have them ready to take to a tournament.

So that is where I am at, a lot of things coming up in the future, some coming to an end, and even more miniatures to paint!

Peace!
Posted by An Empire Fallen at 16:32 No comments:

NiCon's The 9th Age tournament originally was to sport 14 competitors, all of which had travelled from across the North Island to compete. Sadly, at the final moment, one competitor had to withdraw, forcing the tournament organiser to also pull out to keep numbers even.

The calibre of players on the tables was strong, with a vast age group in attendance. Most if not all of the players were former Warhammer Fantasy players, and ranged from casual garage players to high end competitors.

My first match saw me face what was to be the first of three elven armies I fought over the weekend, as a young lad bought out his Highborn Elves cavalry bus list. As many may know, I have a certain hatred towards facing Highborn Elves, as I seem to alway play against them. This game was a great first game to the tournament for me, was fast paced, and my opponent was a really enjoyable person to play against. As it happens, this game landed me a massive win, which put me right onto table one for my next game.

Table one was a scarey place to be so early on, and my opponent definitely proved why. It was here that I fought one of the ETC NZ Team players from last year's trip to Prague, as he took me on with his version of a Highborn Elves cavalry bus. My opponent here was extremely knowledgable, and I managed to learn a lot from him, as I barely managed to avoid being completely tabled by him.

Round three saw me move away from Elves, as I went up against Empire of Sonnstahl, an army that in 8th ed Fantasy I only ever played as, never against. This was an interesting game, and was very close. Unfortunately, we were unable to finish the game in time, which I feel hurt my end result from that game, giving me only a minor victory.

My relief from facing Elves was not long lived, as my final game on day one was against a very strong Sylvan Elves player, who had this time bought along an almost full forest spirit army. It was great to get a game against a different style of SA army, and although I was so tired, it was a good way to end the first day. I cannot recall entirely, but I believe I secured either a draw or minor win in this match.

Day two saw me up against one of the local boys, and up against a Saurian Ancient list that I had helped design. Before heading into this match, both myself an my opponent believed I had the game, and it was just a case of how many points could he get out of it. We were wrong. From the get go, my dice completely turned on me, and after a lot of failed leadership checks and charge rolls, along with poor impact hit rolls, I stormed off to the store on site to buy some new dice. But by this stage it was too late, and my opponent managed to get a major win out of me.

The final game for the tournament saw me face the brother in law of the Empire player, and my Beast Herds got to battle it out against the armour cavalry of the Kingdom of Equitaine. This game, again, saw my luck turn sour early on, with failed leadership checks, poor to wound rolls, and a cavalry bus that charged through with Curse of the Wild Wood on them, and didn't even fail ONE dangerous terrain check on a 1 or a 2. But in the end, I was able to bring the game back into my favor, leaving my opponent which just a unit of peasants on the board. By this point however, I had bled too much, bringing us to a draw.

It was a great weekend and Brian, the TO, did an amazing job. I was disappointed with my final standing as I feel I could have played a lot better, and placed a lot better, but that is the joys of playing a game that involves relying on dice.

So to the final scores:

Yep, you read that right. 4 weeks of none stop painting, late nights, and nearly throwing paint pots at walls, I walked away with this: 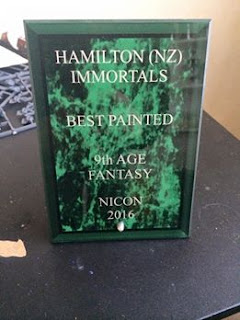 All in all it has been a great weekend. I shall post photos of the army in my next blog case.

Posted by An Empire Fallen at 20:03 No comments: