OTT 2016: The War of the Legions and the Three Elves

This past weekend saw the annual Over the Top tournament in Hamilton. This year, it hosted WH40k, LotR/SBG, AoS and Warhammer 8th. There were about 40 competitors across the mix of games, and was a great weekend.

I took my Legions of Nurgle to the fold, led by the one and only Glottkin in what was an End Times based Warhammer 8th tournament. Prior to deciding on a list, I had really been weighing up if I wanted to bring out my Legions or my Dwarfs. After the lists were released, I really wished I had gone with my Dwarfs. Of the 8 competitors, 3 were mixed Elven lists, and the other 5 were Legion of Chaos lists. In those Legion lists, 3 contained Skull Cannons, which when your running a list based off of regeneration, hurts. So, here's the list I ran: 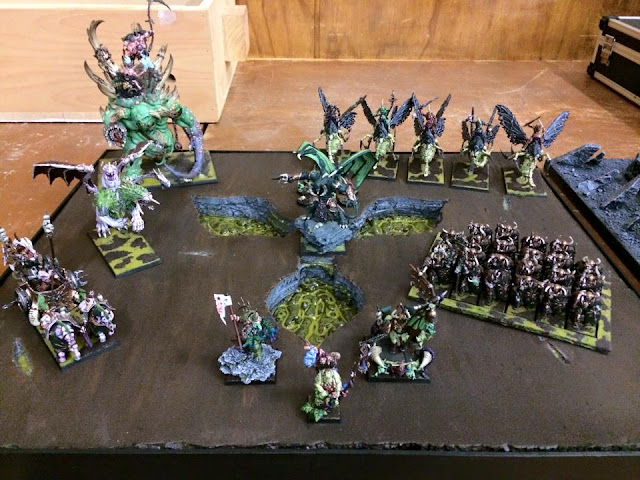 This list was very compact, and I enjoyed the writing and playing of it. However, it has a lot of hard counters that did hurt over the course of the tournament. With out further ado, lets have a brief recap of  the games.

Game One (Brian S)
My first game was against Brian, a good mate from the Hamilton area who I had only ever played against once, which was on the day I met him at WarBanner 2014. He opted for this tournament not to bring out his Dark Elves, but a Legions list he had been working on for a long time.
I think going into this game, we both believed I would win, even with his flaming Skull Cannons. However, whether by lack of sleep or poor judgement, I went against my instincts in deployment and instead of deploying to overwhelm one flank as I should have, I spread my force out. Due to this, he was able to pick off my units one by one, and it wasn't long until I had nothing left.
Brian is a great guy, and awesome player, and he really worked my poor choice to his benefit. Even taking a loss first game, it as great fun. 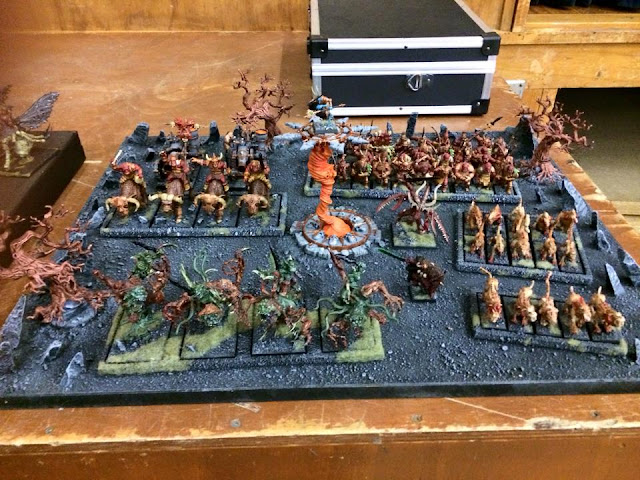 Unfortunately due to charger issues, Brian's army is the only one I was able to take a photo of.

Game Two (Adam R)
My second game saw me in a game against Adam and his legions list. This list didn't contain any Skull Cannons, but was based around the concept of speed and hard hitting. It contained 3-4 chariots, 2 units of Skullcrushers, 2 Chimera, and several lone characters running rampart on the battlefield. This game swung a bit, and we both had a lot of failed chargers across it. I really think Curse of the Lepar spell on my Warriors is what won me the game, as when 2 chariots, a chimera and a unit of 'Crushers come charging in, and are unable to do any wounds, they bounce. By the end of the game however, I am not sure either of us cared who won, as we were just having so much fun. The game was almost musical!

Game Three (Nick Munn)
This was the game that took me out of any contention of placing IMO. My competitor was a great dude, and really know how to work his list to its full potential. However, a few bad dice rolls on my part caused everything to unfold very quickly for me, and I was tabled with very little points gained. I must admit, I felt very dismayed by this game and knew that I wasn't likely to place after that.

Game Four (Nick Jebson)
And then this game happened. It was our final game on Saturday night, and I was matched against a Dark Elf player with a fairly balanced list, which is always nice to play against. Nick was an awesome dude, one of those people you would happily play again and again, because he made the game quite comic and fun. This game swung back and forwards quite a bit, and I really expected not to win. However, after some luck turned my way, and my tank of a BSB who had won out about 3 challenges against a mix of generic and named characters, he turned into a Daemon Prince who ran rampart on the board. Although I ended up sucking Glottkin into the warp in the final turn, and I didn't manage to table Nick, I picked up a decent amount of points on what was the bloodiest board I had played on yet.

Game Five (Andy H)
Game Five was on Sunday morning, and after a very big night of drinking, I was faced of against Andy and his awesome looking Nurgle army. There isn't much I can say about the game itself, as it was extremely uneventful in the fact that neither of us could really kill any of our opponents units. To be honest, I think the few points we both got were based more of secondary scenarios then our opponents losses. Andy was yet another great player, with a very competitive mindset. I do believe if we had not both been playing Nurgle, I would have been very hard pressed to pull of a victory against someone so tactical.

Game Six (Tom D)
In typical tournament fashion, I ended the tournament against my close mate and travel buddy, Tom. He was running a 1000pt Malekith led Elven host, a list that I had helped him write and had always miserably been crushed by it. Tom was sitting high up there in points, and there was not a lot of difference in standings between the top 4-5 players. This scenario allowed us to cast the End Times spell related to our lore, and after Malekith failed to land Pit of Shades onto Glottkin in top of turn one, the Brothers Three cast the Nurgle End times Spell at the Eternity King, and turned him into a Daemon Prince. It was the beginning of the end, and both of us were stunned as I managed to table him and claim max points by turn three. Unfortunately, this took Tom out of the running to place in the tournament overall.


It was a fantastic weekend, and we all had a lot of fun. McCrae L went on to take out the Best General award with his Wood Elves, which he was quite happy with.
As part of the tournament, we had to provide a paint 'Hero of the End Times' miniature to purpose in the secondary scenarios. There was an award for this model as well, which Tom won. However, Tom made the decision after we returned home that as I had actually painted the miniature as part of a commission for him, that he wanted me to take the award. This was really kind and unexpected, and I have so much respect for this guy as both a player and a friend.
The final award, Best Paint overall, which was the prize I had been aiming to get, just managed to land into my hands, with another player sitting just one vote behind me. I am very estatic to have pulled this off, and humbled all the same that other players felt it was worth voting for. To those who did vote for it, thankyou, it is much appreciate. 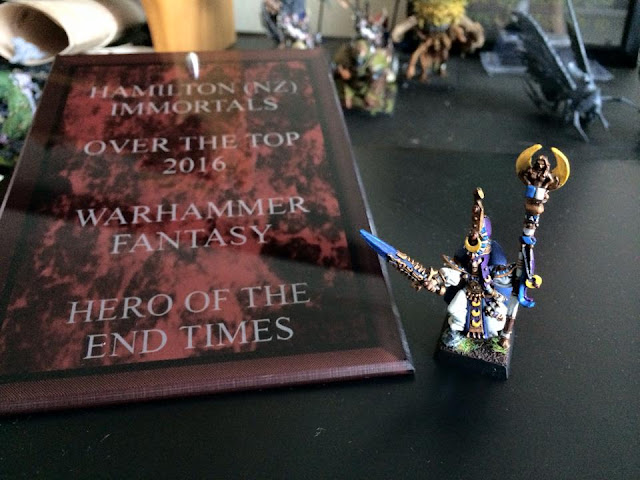 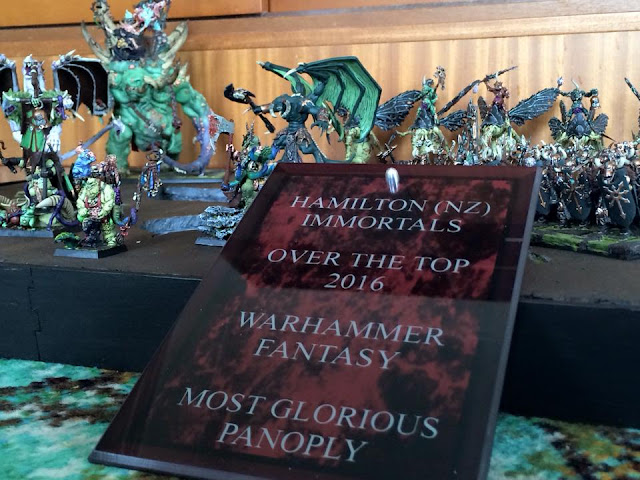 The Bronze Legion of Nurgle, my OTT Best Painted Army and Award

It was a great weekend away, with lots of laughs and excitement, and was definitely worth the trip. I look forward to returning next year to hopefully compete in either 9th Age (should this system become adopted) or Lord of the Rings/Hobbit SBG.

Thanks again for taking the time to read my blog, and I should hopefully have another hobby post up soon!

Posted by An Empire Fallen at 15:17 No comments: