I suddenly came to a realisation the other day, that my Beast Herds is made up of goats, cows and horses.....I should just play FarmVille, would be much cheaper!

I haven't been able to make much progress on my Beast Herds army recently, which isn't a good thing as I have an entire army that needs to be painted and converted and based in preparation for Nicon 2016 in June, but I will get there (a LOT of sleepless nights ahead!). Truthfully, I just haven't had the time, between work and studying for my General Manager's Certificate, and business planning and meetings, it doesn't leave a lot of hobby time. To make it worse, well, I need new paintbrushes! I did manage to pick up a giant model and assemble it, now to just do the conversion work to it!

However, gaming wise is a different story, as I have managed to get a fair number of 1500pt games in with a good mate of mine, and have managed to pull off victories in a good portion of those games. Why 1500pts and not a bigger game you might ask? Well, we are preparing for two campaigns that kick off this week!

The lesser of the two campaigns, which kicks off tomorrow, is Around New Zealand in 16 Battles. This campaign was designed around encouraging people to play more games, and play against or with a variety of different armies. It's open to all New Zealanders too! Although it kicks off tomorrow, anyone can join it later on, which is great as new players come to the table.
Basically, the goal is to cross off a list every single army in 9th Age, whether you won or lost. To do so, you either have to play against that army, or play with that army. It's that simple!
You can get the player pack here:
https://drive.google.com/open?id=0B2HkCXLSe9TUdmNQV0JCZFJ0WmM
If you are interested in jumping in, register at plaguebearersnz@gmail.com . Oh, and its free!
The only catch is, you have to provide a battle report of the game as proof it was had! This can either be in a bunch of story time pictures with a description, a blog post, or a YouTube video. So long as it is open or all to view and enjoy, it works. For this, I am electing to kick off my own Channel on YouTube! Fun times ahead!

The second campaign, which kicks off this evening, is a local campaign called Tribal Warfare. It is a 1500pt campaign battled across a portion of the 9th Age World: 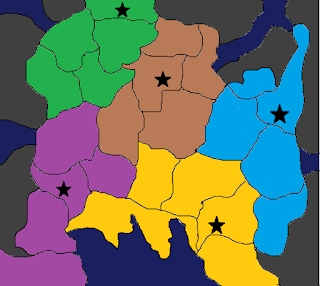 Each campaign turn lasts two weeks, and in that turn you may make up to 3 attacks on territories you are either connected to by a waterway, or by an adjacent territory that you own. You also have to play out as many defence games as you are attacked.
There are three special one use only plots that you can declare you will use at the start of a turn. The first one allows you to make an attack on any tile that you normally wouldn't be able to attack because you do not have an adjacent territory or aren't connected by a waterway. The second is like a forced truce, where once declared against a player, they may not attack you during this turn, nor you attack them. The third one allows you to in one game have an additional 10% worth of points.
Your general is also free, but must be used in every game. You start the campaign giving him one piece of mundane equipment from your list, and as the battles rage, he can get upgraded. You may purchase him a mount, but if you do, the mount's cost comes out of your 1500pts, and he must always ride that mount in every game henceforth (unless you trade him up to a more expensive mount).
For this campaign, I have decided I will post blog updates at the end of the turn, with details on my own games, where my general is at, and what's happening on the map, along with any thoughts on the campaign itself. I will probably also use some of these games to knock off armies in the Around New Zealand in 16 Battles campaign.

All in all, a busy time a head, and I cannot wait to kick these campaigns off!
Posted by An Empire Fallen at 14:19