From Last Place to Podium: Three Years at Panzershrek

They were warned. The were told to run. The Blood Hunt returned, and boy were they hungry....

This past weekend saw the annual Panzershrek tournament, a FoW and T9A event in Palmerston North.

My tournament travel partner and best friend, who also turns out to be the guy who manages to get me to drink faaaar too much over tournament weekend, decided it was time to get back onto the scene, after having nine months off after Invitationals at the end of last year.

So, going to a tournament, what does this mean? Well, it means cramming in some last minute painting! I managed to get the paintbrush down at 8pm on the Friday night, after sitting down and doing a solid nine hour stint of painting to complete a few unfinished models, and paint from scratch my beautiful new Gortach model from Mierce Miniatures.

So, with the Blood Hunt packed and ready, and the roads thankfully open, Saturday morning we hit the tournament scene once again...

My first game I had dubbed prior as likely to be the most enjoyable game I have all weekend. My opponent, a very talented player and painter, was the last person I played on tournament, handing me a crushing defeat at Invitationals which cost me the podium. It seemed only fitting to come back to the scene and face him again!
He didn't make it easy though did he. His MSU style Sauian Ancients are got a little "race-confused", dancing around my army and running away like pesky wood elves. I remember at one point in the game looking at the board and couldnt believe how much of a cluster-fucked mess board the table was, with no clear vision of who was where.....everything was just so spread out.
This game landed me a 16-4, and as I had assumed prior to the game, was the most enjoyment I had all weekend. My opponent isn't just an awesome player, but a real good guy to throw dice around with.

Landing on table two, I was up against my first ever T9A tournament opponent, and his flying circus of chicken...okay okay, Highborn Elves. Although confident I could secure a victory in this game, the idea of double phoenix and double sky sloop running circles around me, was a concern going in. I mean, the Blood Hunt is fast, but these Elves had their share of Red Bull, as they had wings!
So with some fast moving up turn one, and punishing magic rolls, by turn two we could see where the game was heading. I think had it not been so early in the game we would have just called it there, however finding things to do for 3 hours waiting on the next game, would have been boring.
I took out a 20/0 victory in this game. My opponent is a great young player, with a real obvious thirst to learn as much as he can, both in battlefield tactics and in hobby, and I really hope I was able to pass on a few tips to him.

Sitting at 36/40 points going into the final game of the day, I was on table one against my arch-rival (yep, you have claimed that title now 😛), a player who takes out just about every event he goes to, and whom I have yet to defeat.
Going in there with confidence that I could beat him, even just slightly, held my play together for a while. Up until the start of turn four, it was still easily anyone's game. However, the long march to get to the stunty dwarfs hiding in their corner bore down on my herds, and thinks quickly fell apart after that.
I walked away from this game crushed 1/19, and was ready to settle for a mid pack placing.
We had dinner and beers with my opponent again, and as per usual, he was more then willing to share ideas on some really out there but quite effective list ideas for different armies....looks like my Blood Hunt will be getting a few new units added....and all of them centaurs.....

After my defeat game three, Sunday morning saw my hangover up against my favourite Sylvan Elves player. You have to realise, that games one, three and four, were against three of the top players in the country, and although I have played a lot of tournaments, I have never faced a collaboration of them all.
Going into this game, I knew it would be hard, as although my ETC team opponent's list did not look hard on paper, it had one secret weapon that would tear my army to pieces. But turn two saw tragedy strike my opponent, in what was the biggest upset game of the weekend, as my two-wound remaining Gortach failed a frenzy check, charging his lord's unit of sisters, who failed to add to my wounds with their stand and shoot. Adding salt to the wound, the strength 6 or 7, 5 or  6 attacks lord, flubbed. The sisters managed to get one more wound off, and then the Gortach went to town. At this moment of horror, my opponent accepted that the game wasn't to end his way, and I left the table sitting on 55/80pts, taking a 18/2 victory against the chicken.
My opponent in this game is a really great guy, and that loss was crushing. Although I still currently stand as one of two players he has never beaten, the games I play against him are usually some of the most hands on intense games, and I love it. Another fantastic opponent!

Heading into game five I knew I was sitting first equal to the player who crushed me at the end of Saturday, and needed to score well. But of course, my opponent ad best friend, wasn't going to make that easy for me!
Taking on his ogres once again, I went into the game with the confidence that he had never beaten my Blood Hunt, a confidence that quickly dissipated into nothing as my first three turns saw my army collapse and perish to immense shooting. After a quick smoke and accepting my fate, I returned to the table to face the Khan's Judgement.
And that was when the game turned....
With major failed charges, and his inability to roll high to pursue, his army was left extremely vulnerable. I was able to take out the remainder of his army with just a wounded Gortach, my general and bsb, and a lone razortusk that had done nothing all game, and swung the game back to a 20/0 victory.

Panzershrek '17 was yet another great weekend that just went way too fast, and our TO, did an amazing job running the tournament for the first time. Everyone had an absolute blast.
And then this happened... 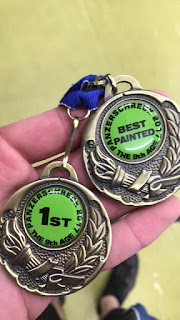 Not only was I able to take best painted two years in a row at Panzershrek, with last year's being the last time I took a tournament paint award (I @BlametheDice......get it slishy? #insidejokes), but I was able to not only podium after nine months off the scene, but take the gold!!!!
It was interesting reflecting back on Panzershrek over the years. in 2015, I remember walking away gutted with a last place result, and last year sitting comfortable with mid-pack. To turn my original last place to a gold result seemed quite fitting.

There are a lot of things in the works, and I will be sure to do a Hobby update very very soon, but until then, some eye candy for you of what was apparently the best painted army 😝 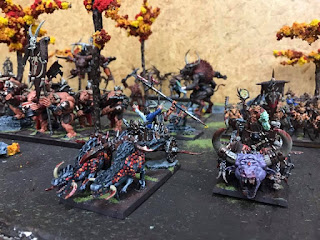 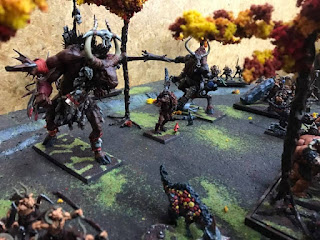 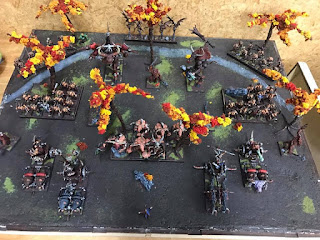 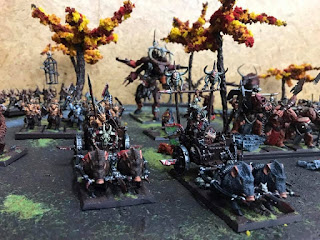 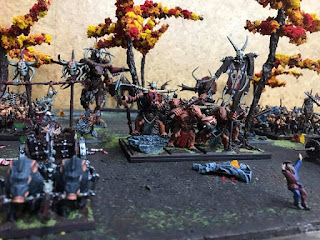