'In the burning embers of a world almost lost, a land lain asunder by the fires of chaos, in the end of the end, the darkest of days, when all hope had been lost, rose a warrior from the darkness, and in the grim steel of his resolve, took the step towards the resurrection of all that was lost'.

Since I have known about the release of the 9th Age, a player/community based continuation of Warhammer Fantasy, developed and updated by the teams behind ETC and Swedish Comp, I have fully supported the idea. Age of Sigmar and Kings of War both failed to grab my attention, whereas the 9th Age still held the flavour and complexity that I enjoyed from WHFB.

The only concern that I had, which I knew many players had about it, was how well a community based game that did not have a gaming company who produced models to back it and drive it, was going to be a sustainable gaming system that would not only hold the interest of players, but flourish and grow. But as time went on and I followed updates from the 9th Age team, and read blogs of other supporters of the community built game, this concern grew less and less, and my love of the idea for a game that was all about us as gamers grew. 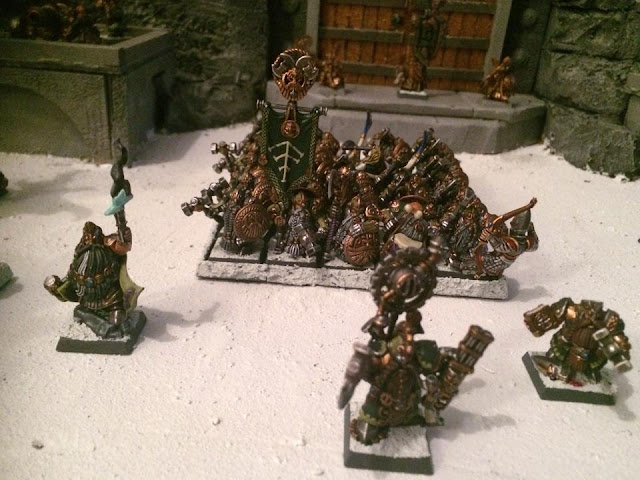 And then today happened. A day of mixed feelings of despair and dread.

The 9th Age Ruleset and Army books were released into Beta, not yet confirmed rulesets, but a good idea of what we are to expect. So I sat down to look at what had been produced for my favourite army, my Dwarfs, which was the army that drew me into this game so many years ago, and I have loved and 'mained' ever since.

At first, I was quite mixed in my feelings towards what I saw. The huge change and drops I saw the runes available suprised me. Many of the were the same or similar, but with less versatility. In particular, I was a bit distraught in the drop to 3 runic banners the dwarfs could take, all adaptations of what the 8th edition Dwarf rulebook had. Now all 3 of these are standards that I would happily use, but not the ones I would most commonly use. I also started to worry that some of the feel and fluff was forgotten about for Dwarfs when I noticed that you could take magical standards from the common magic items section of the main ruleset. I also felt a little worried when I noticed that Dwarfs only had +1 to dispel as opposed to their current +2. However, I pushed this aside and carried on reading.

In the next areas, covering unit entries and capabilities, my hopes started to rise. Points costs of units seemed to be very similar, or in the aspects of units that were previously overpriced, had been dropped. The new version of Slayers gained a much needed (however still only token) 6+ ward save, and the new Hammerers went from having a 5+ armour save to a 4+, which made so much more sense with the fluff around the unit (Games Workshop let us down in this area). The cost of warmachines and copters had also dropped, making taking some of those once more expensive warmachines (ie, flame cannon) more viable. 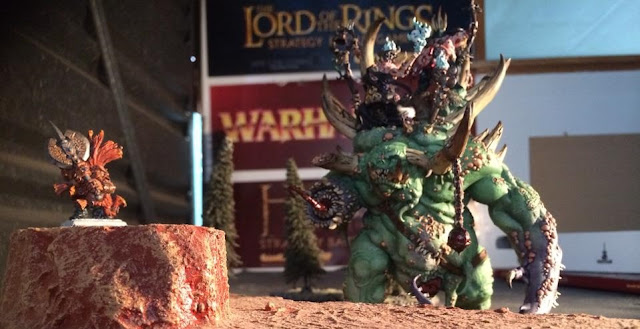 A Dwarf Slayer preparing to fulfil his oath against The Glottkin

The I decided to look more indepth at the new version of the Gyrocopter, the SteamCopter. And my heart dropped lower then ever. It was not long ago I really found a love for this flier, and had invested a lot of money and time to be able to run 5 in a list. But reading the new rules, I realised that this dream had come to an end. The SteamCopter are a base of 80pts for a single model. This is fine. You may now take them in a unit up to a max of 3 at 70pts per model extra. This is kind of cool. However, the Steamcopter is not armed with a steam gun using a flame template anymore as standard kit out, and you may only upgrade a gyrocopter to do so (which is a free upgrade) if the gyropcopter is running as a solo model and not in a unit. Okay so that's fine. However, you no longer have the ability to run up to 6 of them, and now follow the standard 3 Special Choices cap. This was where my dreams of running a flier list was dashed.

At this point I had seen enough, and needed to walk away and think for a while. As I was doing a load of dishes, I was listening to a youtube video from a guy whose name I cannot remember, but he was talking about whether the game was dead or not, and what the term dead meant in context with this game. And it was then that it all suddenly dawned on me.... 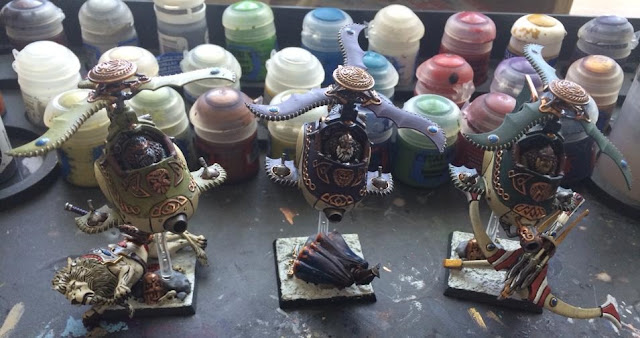 3 of my completed Gyrocopters ready to rain fire

It's a new day. It's a new dawn. It's a new challenge. It is the same as when changing book editions and the things we once loved not being as good as things that were once worse. A time to come up with new plans and ideas, new strategies and synergies. A time for revival in the game. And yes, maybe your Gyrocopters too have been made less effective, but now those Slayers you have had sitting there collecting dust have just become that much better. It is a time not to despair over what we see and read, over changes in rules that we may or may not like, but a time to find new rules and concepts that we do like, and to use them to the best advantages we can for our forces.

It is a time to find new excitement and thrill in the game that we all love and play.....